Sarpino’s Pizzeria, already a delivery and carryout concept, didn’t have to pivot like so many restaurants during the pandemic. Now, the 44-unit company is ready for expansion in some new and current markets.

“As the pandemic unfolded, we were kind of uniquely positioned and already doing high-quality (food) so we didn’t have to learn how to compete in that market,” Scott Nelowet, director of franchise development, told PizzaMarketplace in a phone interview. “We have it down to a science.”

Sarpino’s Pizzeria launched in Canada in 2001 after its original founder went on a trip to Italy and decided to open a delivery and carryout business. Eventually, expansion took the brand beyond Canada to the US, Singapore and several other countries.

David Chatkin, current president, began his career at Sarpino’s as a franchisee. In 2005, he and a partner bought the company’s domestic operations and the rights to the US region.

Today, Sarpino’s USA has 44 locations in seven states, all of which are franchised. The brand’s AUV sits at $1.084 million to $1.35 million coming out of just 1,200-1,300-square-feet per unit. The company is headquartered north of Chicago in Lincolnshire, Illinois.

The brand specializes in gourmet and specialty pizzas with proprietary recipes. Roughly 75% of sales is pizza based. Almost everything is made in-house, including dough and pizza sauce. Cheese is grated and vegetables are chopped on site as well. Pizzas, calzones and other items are baked in a high-capacity conveyor oven.

“We want to sell a fresh product,” Chatkin said. “We think there’s a big difference between processed food and food made in house. We consider ourselves to be a premium product. We sell more expensive (ingredients) and we charge higher prices. It’s more labor intense, but that’s our specialty.”

During the pandemic, Sarpino’s introduced a vegan menu, and it was a hit from the start, Chatkin said. While many restaurants have a few vegetarian or vegan options, Sarpino’s has an entire menu. Dishes range from vegan pizzas made with non-dairy cheese, to vegan calzones, pastas and even chicken tenders.

Nelowet said the vegan menu has been popular with Gen Z and Y customers who are flexitarians and love the options.

“It’s the type of product where we don’t necessarily need to market it because the kids are marketing it for us,” Nelowet said. “They’re so excited that somebody’s not just throwing (vegan items) in as a second thought. We spent a year doing the research to make sure we produced a top-quality vegan line.”

But sustainability doesn’t end with a vegan menu. What little furniture the stores have is made from recycled materials.

“This vegan thing isn’t accidental,” Nelowet said. “It’s actually a model that’s been built all the way through. Everything is built as inexpensively as possible using as much recycled materials as humanly possible with as little waste as humanly possible.”

When Nelowet visits a restaurant, he doesn’t necessarily look at spreadsheets. Instead, he wants to look at the trash cans in the kitchen to check how much waste the restaurant is producing. At Sarpino’s, he said, everything is used so efficiently that there’s little waste. 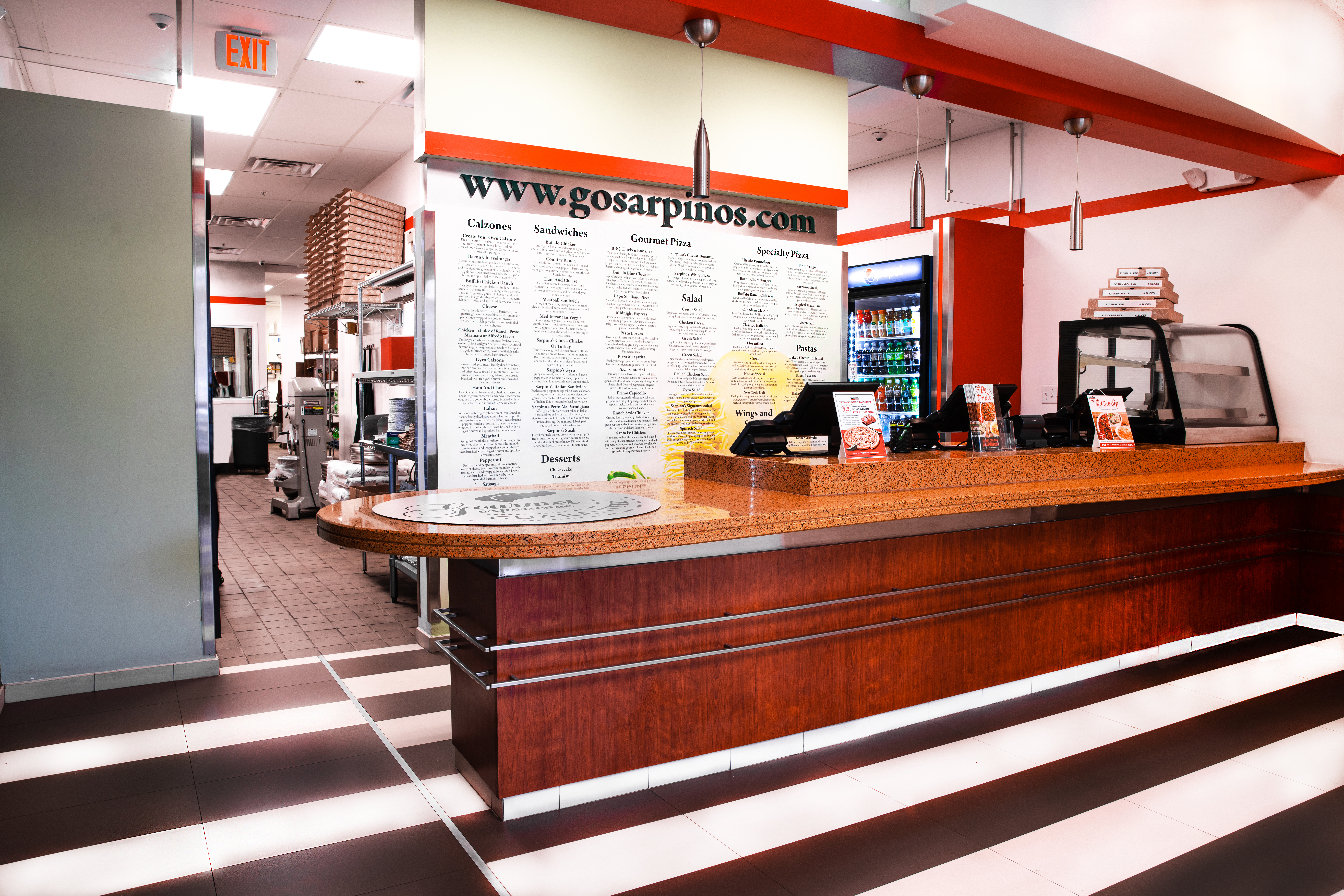 “We believe in the delivery market, quality food is a rare thing,” Chatkin said, adding that is what sets Sarpino’s apart from its competition. The restaurants are open 365 days a year, including holidays, with late nights. Sarpino’s also doesn’t charge a delivery fee, a novelty as many pizzerias are raising delivery fees due to inflation and the rising cost of gas.

“We don’t have any hidden fees,” Chatkin said.

Though they don’t have a time limit on deliveries, they try to get quality food to the customer within 30 minutes.

To maintain continuity across the brand, Sarpino’s has well-developed processes across the brand. Franchisees get 30 days training at its center in Illinois and another 30 days in store with two people from the training center.

“We are with them from the very beginning to establish certain standards,” Chatkin said. “Then we do monthly visits to confirm that all standards are in line.”

Like many in the restaurant industry, labor is the brand’s biggest challenge. Three years ago, Sarpino’s developed a proprietary employee portal and introduced a digital application process. Chatkin said the company gets a large number of applicants, but only a handful actually show up for the interview and get hired.

Retention remains critical for the brand.

Drivers and managers have proprietary applications to use to help make operations easier. Such technology is even designed for those employees for whom English is not the first language.

Four or five stores are planned to open in 2022, and the company has sold 20 units this year. Sarpino’s is targeting new markets in Florida and Missouri and in current markets.

“We’re very careful about where we grow,” Nelowet said.

While Sarpino’s opened up Colorado for a multi-unit deal with a former employee, they prefer to stay in current states.

Sarpino’s is looking for franchisees that will work hard, and who loves the product. It also looks for what Nelowet and Chatkin call “second-chance people,” or those new to the country looking for new opportunities or those leaving the corporate world.

“We’ve got a lot of first-generation Americans as franchisees,” Nelowet said, “and they’ve done fantastic.

“We’re looking for someone who will put in their heart and soul. You can’t halfway this. It’s not something that you open up a franchise and walk away. This is something you’ve got to be ready to work, and you’ve got to love it.”